That was all it took.

We did 15 minutes of research, made a reservation and two days later we were in an Uber on our way to Sao Conrado Beach. It really was time for some Rio de Janeiro hang gliding.

We met Paulo, the owner of Just Fly Rio and our main instructor, on the beautiful beach. We signed some paperwork at the office of the local Rio de Janeiro hang gliding association. And then, after one last weather check, we hopped into Paulo’s jeep and began the journey to the top of the nearby Pedra Bonita mountain (520 meters high).

We were fitted with gear, given a safety lesson and provided with a few minutes of instruction while an assistant assembled the first hang glider.

Suddenly, Georgiana was hooked up to the wings and the instructor and two final safety checks were performed. Then, off they went. Running down the ramp and off into the sky, straight into the clouds. It was nuts.

At first, they immediately disappeared below, as if they plunged straight off the ramp. But after ten seconds, they re-appeared in the mist, soaring upwards along the edge of the mountains. And so her Rio de Janeiro hang gliding adventure began.

Ten minutes later, it was my turn. Henato, another instructor, showed up and we went through the same routine. Harness, instructions, safety checks…and before I had a chance to really soak it all up, I was also running down the ramp, attached to this huge green triangular wing.

And then the ground was gone and we were flying through the sky.

I’ll let this photo and video explain it all… 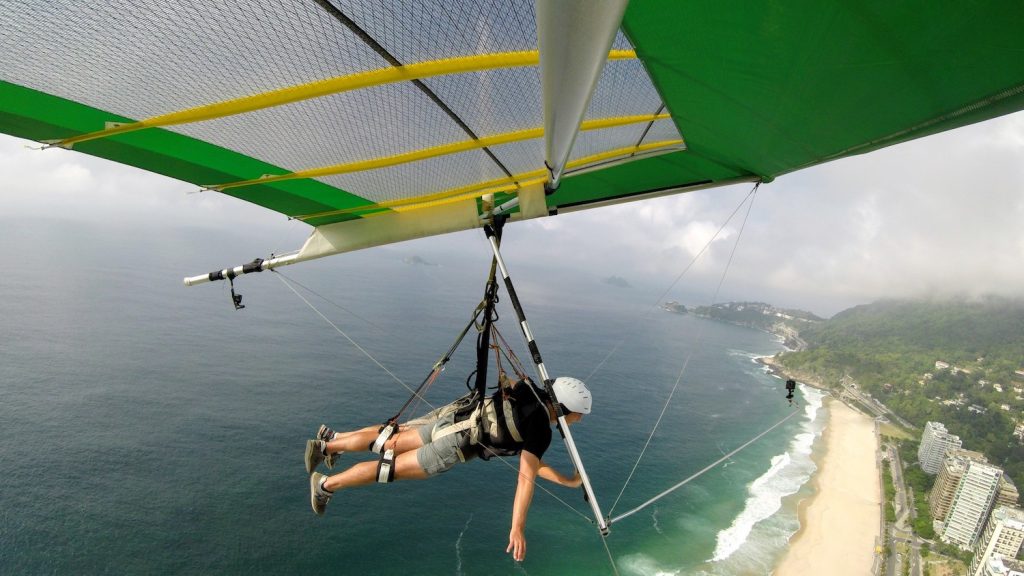 In brief, we loved it. Every minute of it. The sensation of flying really is something special…when you’re maneuvering with the wind, turning and twisting, rising up and floating down. At first it feels bizarre, but it doesn’t take long to become soothing and almost meditative.

Depending on where you do it, the scenery certainly helps too.

While flying, I actually asked Henato about his favorite places to hang glide (yes, we were having normal conversation up there!). He said the Swiss Alps was probably his favorite but this particular Rio de Janeiro location was second. And he has over 800 hang gliding flights under his belt, all over the world.

It’s hard to argue really. This Rio de Janeiro hang gliding experience takes off from a mountaintop above the dense jungle of the Tijuca National Park. You then fly through the clouds towards the white sands of Sao Conrado Beach, passing over neighborhoods tucked into lush green valleys, with views out over the rocky islands off the coast. And you actually land on the beach itself.

If you’re in Rio de Janeiro and want to fly, it’s worth looking into. I can’t imagine a better spot and as soon as you’re up there in the clouds above this gorgeous city, you’ll see why I’m so enthusiastic!

Here’s the company we used:

*The flight lasts between 7 – 20 minutes, depending on wind and weight. For a very reasonable rate you can receive photos ($15 USD) and videos ($20 USD) of your flight as well.

The owner, Paulo Celani (he was the main instructor as well), was thorough, very thorough, in terms of safety. Completely professional in every way. Whichever company you use, just make sure to read the reviews and see how others felt about the safety standards.

Have you been hang gliding?

Success! Now check your email to confirm your subscription.