My writing pitches don’t get accepted often. Sometimes an editor will contact me directly, and I’ll send them a piece, and if it gets published, it may do quite well (my piece on bullying for The Washington Post was an example of that), but it rarely gets to that point. More often than not, I’ll send stuff out and either get a rejection or, worse still, I’ll hear nothing at all. Those are the days when that little voice that is constantly chirping at the back of my head – the one that tells me I’m terrible – is loudest.

Sometimes I’m able to ignore it. Other times, I just pout and check Twitter and then do laundry (this happens a lot). People always ask me if it’s difficult to decide what to save for The Everywhereist and what to pitch, and I’m tempted to laugh, because no, no it is not difficult. It is very easy, because there is usually no alternative. It is here, or nothing.

I published my essay about Mario Batali and his shitty cinnamon roll apology on this site because I assumed that no publication would want it. It ended up getting a James Beard nomination for Journalism in the Personal Essay category.

And then it won.

This doesn’t fall into the schema of dreams coming true, because this was never a dream I’d had. It’s not something I thought was in the realm of possibility. It’s up there with “Getting a Grammy for flossing properly” or “Winning an Oscar because you just had a very satisfying poop.” Like, these things just don’t exist.

My blog was up against publications whose editors don’t even reply to my emails. In the intervening weeks, Rand (who, if you’ve been playing along at home, adores me and thinks the world of me) and I had many discussions about how just getting nominated was an honor. And that was true, of course, but it was also designed to set my hopes appropriately. Because even we didn’t really think I’d win. My entry was filled with cuss words and amateur photos taken in my tiny, poorly lit kitchen. It didn’t feel like it was in the same category as the other pieces. I was going to lose, and that was fine. I’d already achieved more than I could have ever dreamed.

(Note: I do not want your takeaway to be that this is some triumphant underdog story, because that is self-serving and not really accurate. I am a woman with a hell of a lot of privilege. I have a safe place to write, and a strong internet connection, and a supportive spouse, and nearly unlimited time to devote to all of this. I don’t have to deal with systemic racism or ableism or transphobia or homophobia when I put my work out there. The only thing I have to overcome is my own damn self. And institutional sexism.)

I couldn’t go to the awards ceremony, because Rand and I were speaking in a conference in Victoria that weekend. I told myself that this was for the best, because I couldn’t really afford to go all the way to New York and get a hotel just to attend a party where I wouldn’t really know anyone. Plus, the voice in my head, the one telling me I sucked? It can be so loud, y’all. And when Rand’s not around, it’s even louder.

We took a seaplane up and I got to sit in the co-pilot’s seat and holy hell was it neat.

So we went to Canada. And we both gave our presentations, and I’d temporarily forgotten about all of the James Beard stuff for a little while. On Friday afternoon, Rand and I walked along the waterfront in Victoria, and the wind was so brutal it somehow felt personal. We took refuge in a coffee shop and I remembered that the awards were happening at that very moment in New York and there I was in Victoria with hair that had been ravaged by the wind. 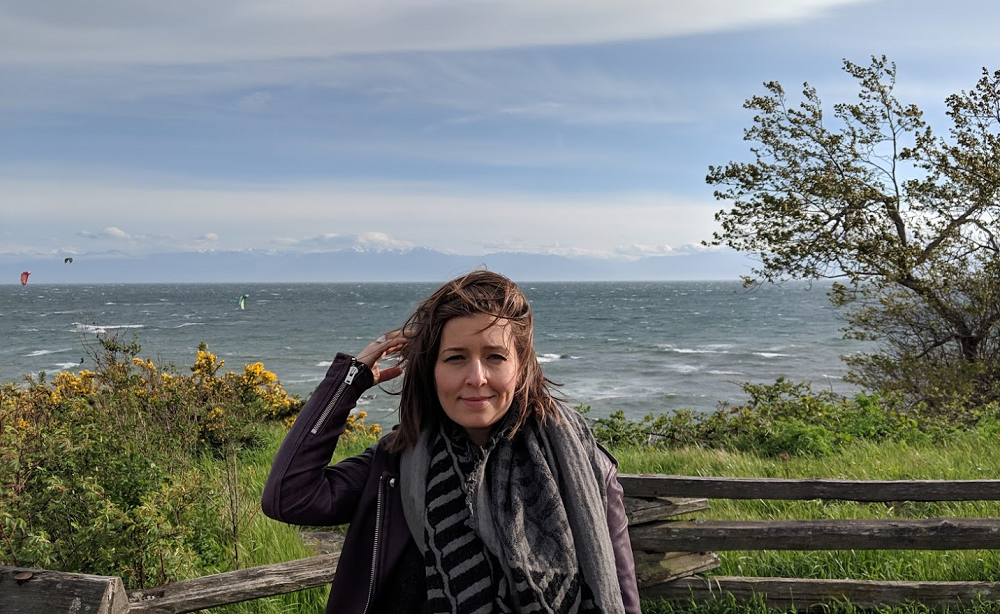 Me, trying to look cool and pretty much failing.

The winners were being announced, and I fastidiously checked Twitter for a while.

“That’s it, I’ve lost.” I told Rand three separate times, because I’d forgotten what category I was nominated for. And then I put my phone away, before I descended further into madness.

But Rand did not.

He was watching the livefeed of the awards when my name was flashed on a screen.

“No,” I told him. “They’re just listing the nominees.” I didn’t consider the fact that up until now, they hadn’t listed a single nominee – they’d only announced the winners.

“But … they just tweeted your name.”

“No,” I said again. “They’re just tweeting the names of the nominees.”

(Note: impostor syndrome is a hell of a thing.)

“BUT THEY AREN’T TWEETING ANY OF THE OTHER NOMINEES,” Rand said. And then he showed me the tweet from the James Beard Account, with a tiny little medal emoji next to it. And I noted that it did seem weird that they’d do that just for a nominee and –

We reacted pretty much how you’d imagine.

And then this damn fool kept looking at me like this all night: 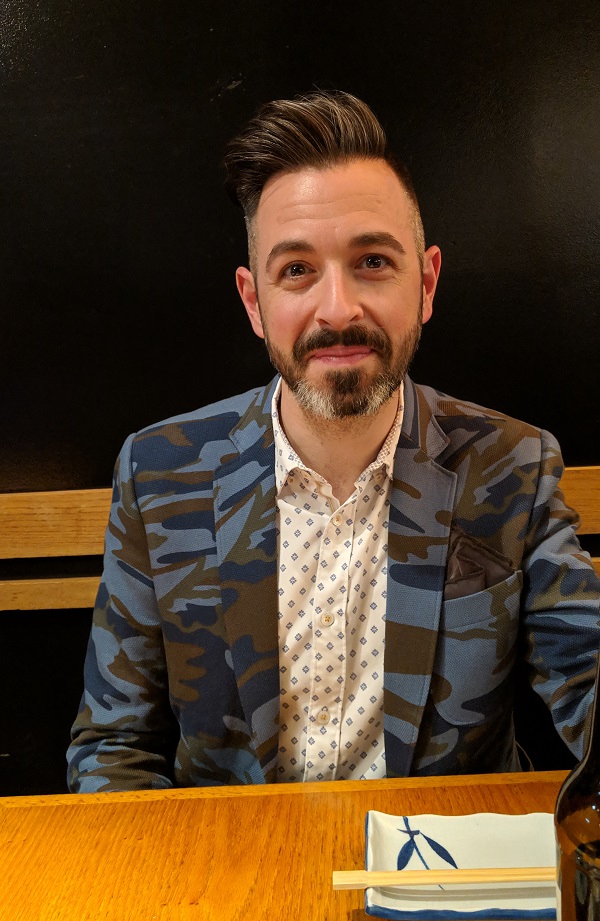 It’s been a week, and I remain still a little bit shocked by all of this, still immensely grateful.  I’ve been overwhelmed by the sheer number of people who’ve reached out to me, by the texts and emails and tweets and comments. By an effusively kind thread on a website not known for its effusive kindness (it was so kind, in fact, that I sobbed as I read it). I am stunned – stunned – by the fact that my piece was recognized is such an incredible way. I feel like that is a singularly profound and wonderful thing. My friend Mara put it so succinctly:

I’m gong to go revisit the piece, scream the way I screamed when I first read it & marry it with these continued screams. But seriously, Geraldine, you have broken some invisible glass ceiling of the establishment recognizing female emotion as something other than hysteria ♥️

I want you to remember something. That even if this piece hadn’t been nominated, that even if it hadn’t won, it still existed. My piece was written more than a year before it won the award. People are congratulating me on something that I created a year ago. The only thing that’s changed since I wrote the piece and now was that I was able to scream “LA LA LA LA LA LA LA” over the voices in my head that are constantly telling me that I suck for long enough to submit it for the award.

Do you understand? The essay that won the award and the essay that didn’t win (because it was never submitted) are exactly the same. The pieces that never see the light of day because no editor wants them and the pieces that go viral are the same pieces. If someone rejects your work, it doesn’t mean it’s not wonderful. If your work doesn’t win awards, it doesn’t mean it’s not incredible. Maybe it still needs a little work. Maybe the people in charge weren’t quite ready for it yet. Maybe the right people aren’t in charge yet. Maybe someone hasn’t scared you into realizing your own greatness.

That’s the part that I want you to remember. You, sitting there in front of your computer. You, struggling to write, and getting your pieces rejected from editors (or perhaps not hearing back from them at all). You are wonderful. Don’t disagree with me. I warned you I would do this. I warned you this award would go to my head. I HAVE A JAMES BEARD AWARD AND I THINK THAT YOU ARE GREAT AND SO I AM RIGHT.

You might not believe me. And that’s fine. You don’t need to believe me. (There are days when I don’t believe me. Right now my award is in Chicago, and after that it will head to New York and eventually I’m going to be able to pick it up, and I’m still sort of think someone just made a clerical error.) The only thing you need to do is make enough noise to drown out those doubts that creep into your head. Distract them just long enough for you to get your work out there. 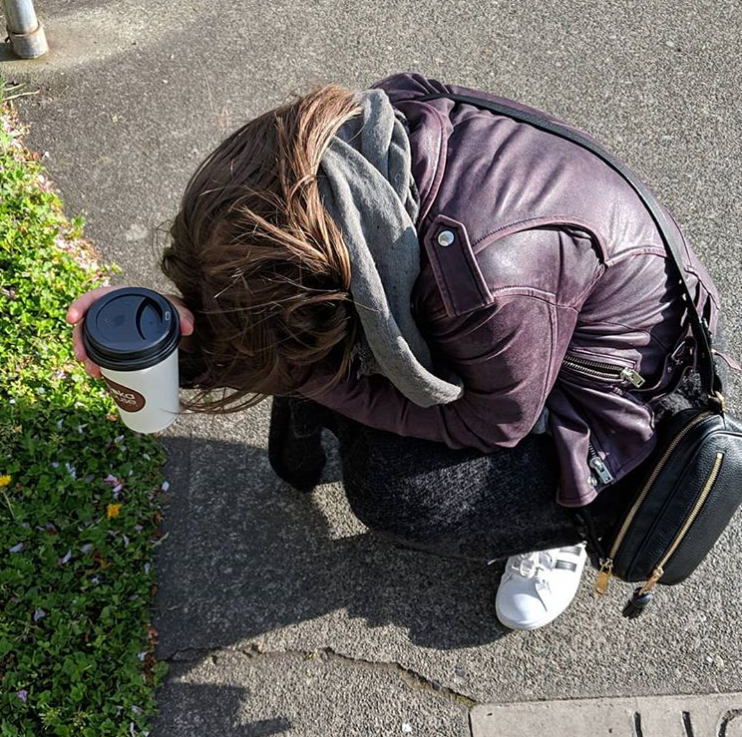 And then, then, just see what happens.