Since the late 1800’s, the legend of the infamous Jack the Ripper Murders in London’s East End has fascinated historians and mystery enthusiasts around the world. Now, a disturbingly accurate dictation of events in the form of a diary signed by “Jack the Ripper” is being reexamined – could he finally be identified?

His is a dark tale of murder and mayhem so shrouded in a fog of questions that even now, with new evidence, there is still no absolute proof of his ominous identity. What stands beneath the shadows he created in Whitechapel, however, are the same misty streets where Jack the Ripper walked among the crowds, unknown, stalking victims along the old cobblestones and in lamp-lit London pubs that still pour pints even to this day.

Take a trip to London’s East End, walk along the same streets and visit the saloons once haunted by the terrors of Jack the Ripper… if you dare! 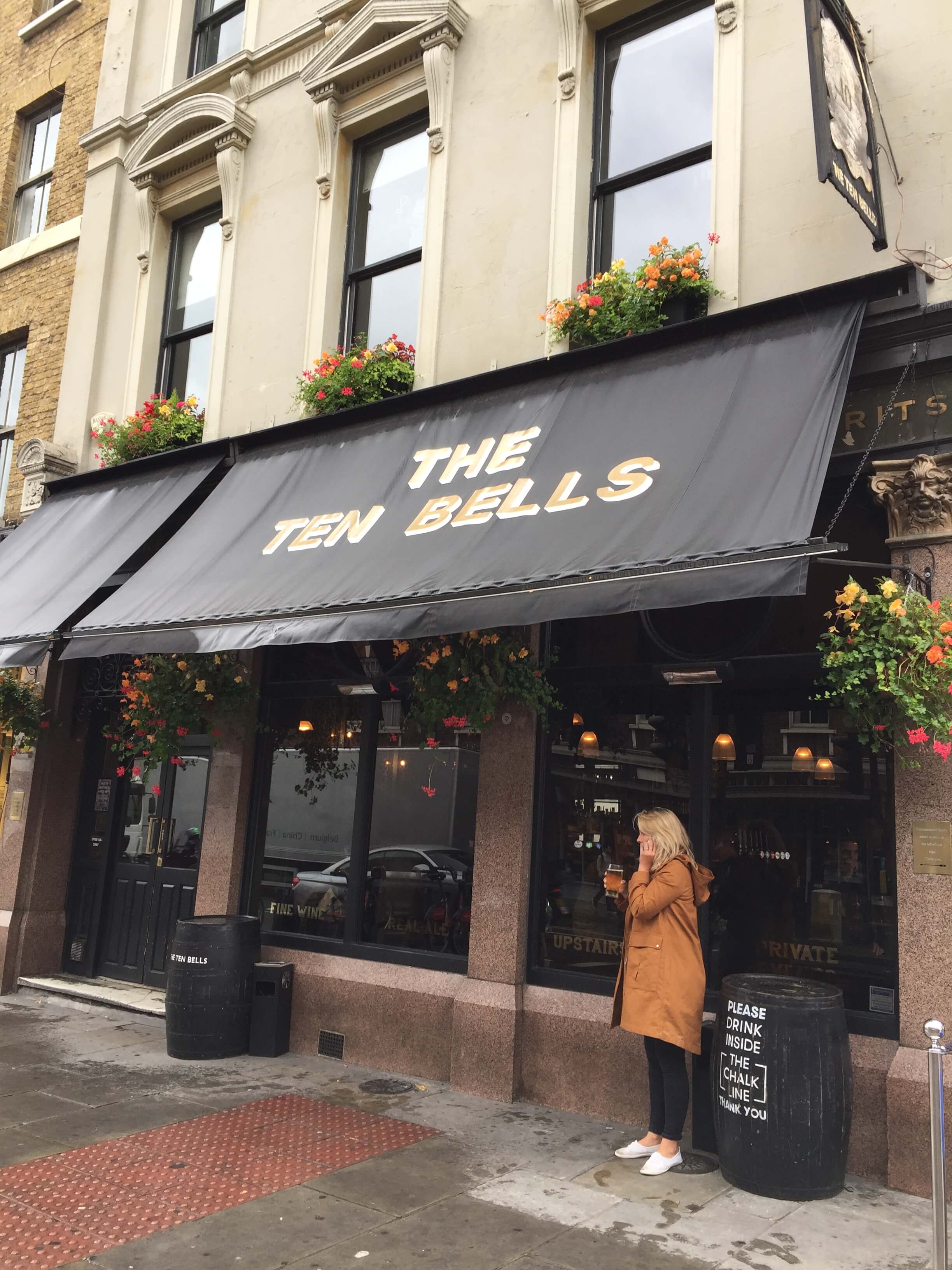 The Ten Bells Pub, where Jack the Ripper is believed to have found two of his victims.

The Ten Bells Pub in Whitechapel is one of the infamous places where the Ripper would stalk and abduct his victims. Some experts link two specific women who met their fate at his hands after meeting at the Ten Bells Pub: Annie Chapman and Mary Jane Kelly.

Still standing to this day, though originally in a different location starting in 1666, the Ten Bells has been established in its current location since the 1850’s, long before Jack the Ripper set his mark on the location. So legendary is this pub that it was featured in the Jack the Ripper themed novel – as well as the movie – “From Hell”, the latter of which includes a scene with Johnny Depp’s character hoisting a pint with future victim Mary Kelly. 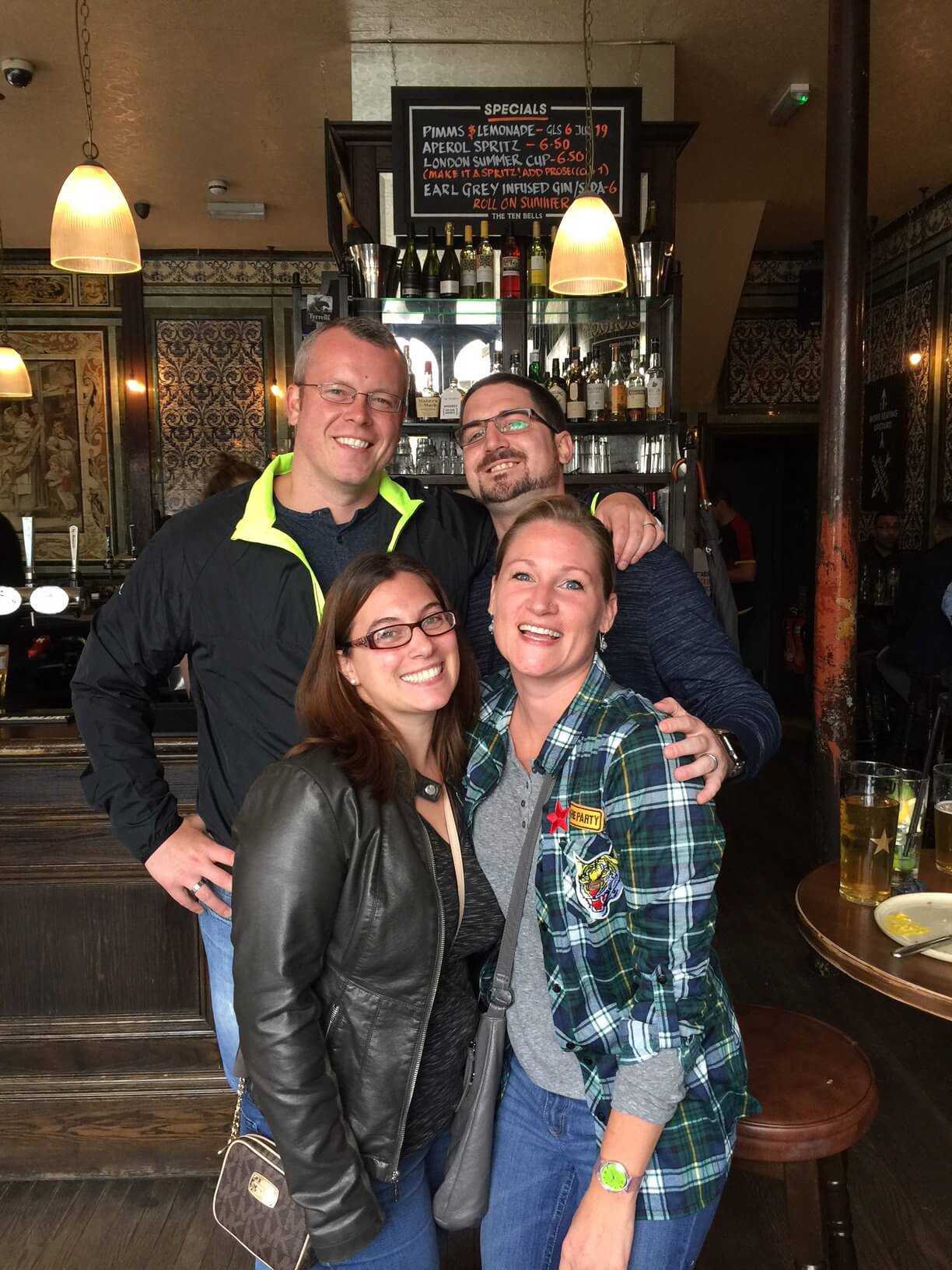 It’s not all grim stories at the Ten Bells – have a few pints with friends!

The Ten Bells is now a charming and friendly, warmly lit pub across from Old Spitalfields Market in the Whitechapel area of London, and one of the first places we visit every time we’re in the city. Though today you won’t have to look over your shoulder for the Ripper every time you hoist a pint, the lingering memories of his nefarious acts may be with you in spirit – especially after you’ve had a few spirits yourself! 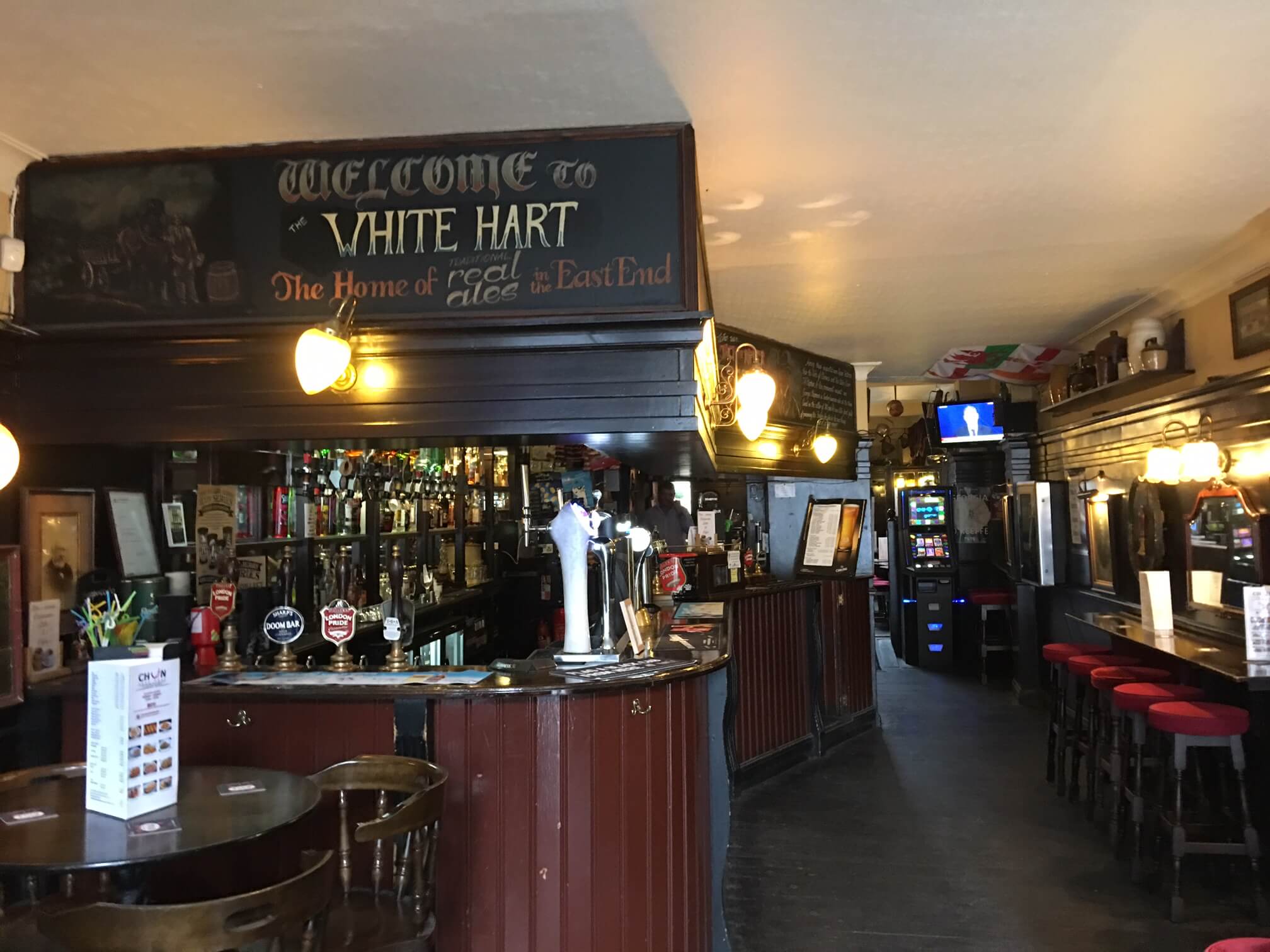 Another of our favorite pubs in the Whitechapel High Street area is the White Hart Pub. While the front addresses the main street, take a walk outside and turn towards the alley known as Gunthorpe Street to find yourself smack-dab in Ripper territory.

A couple years after the infamous murders started taking place in the area, a man named Severin Klosowski, also known as George Chapman, began working as a barber in the basement of the pub in 1890. It was nearby the White Hart Pub that a victim by the name of Martha Tabram turned up murdered in 1888, a consequence that led to Chapman being put in the cross-hairs of guilt due to the proximity to the location, where he worked. However, he later emigrated to the United States, then again returned to London, and was eventually convicted of completely unrelated murders. No solid evidence was ever found or presented that he was, in fact, Jack the Ripper, but many speculated he was the guilty party.

Just outside the pub, past the ominous arch that frames the adjacent entrance to Gunthorpe Street, hangs a plaque asking the pervasive question: “Who Was Jack the Ripper?”. Take a walk down the winding, narrow alley any time of day for a feel for the old streets of London where he trod, and you’ll find yourself asking the same question! 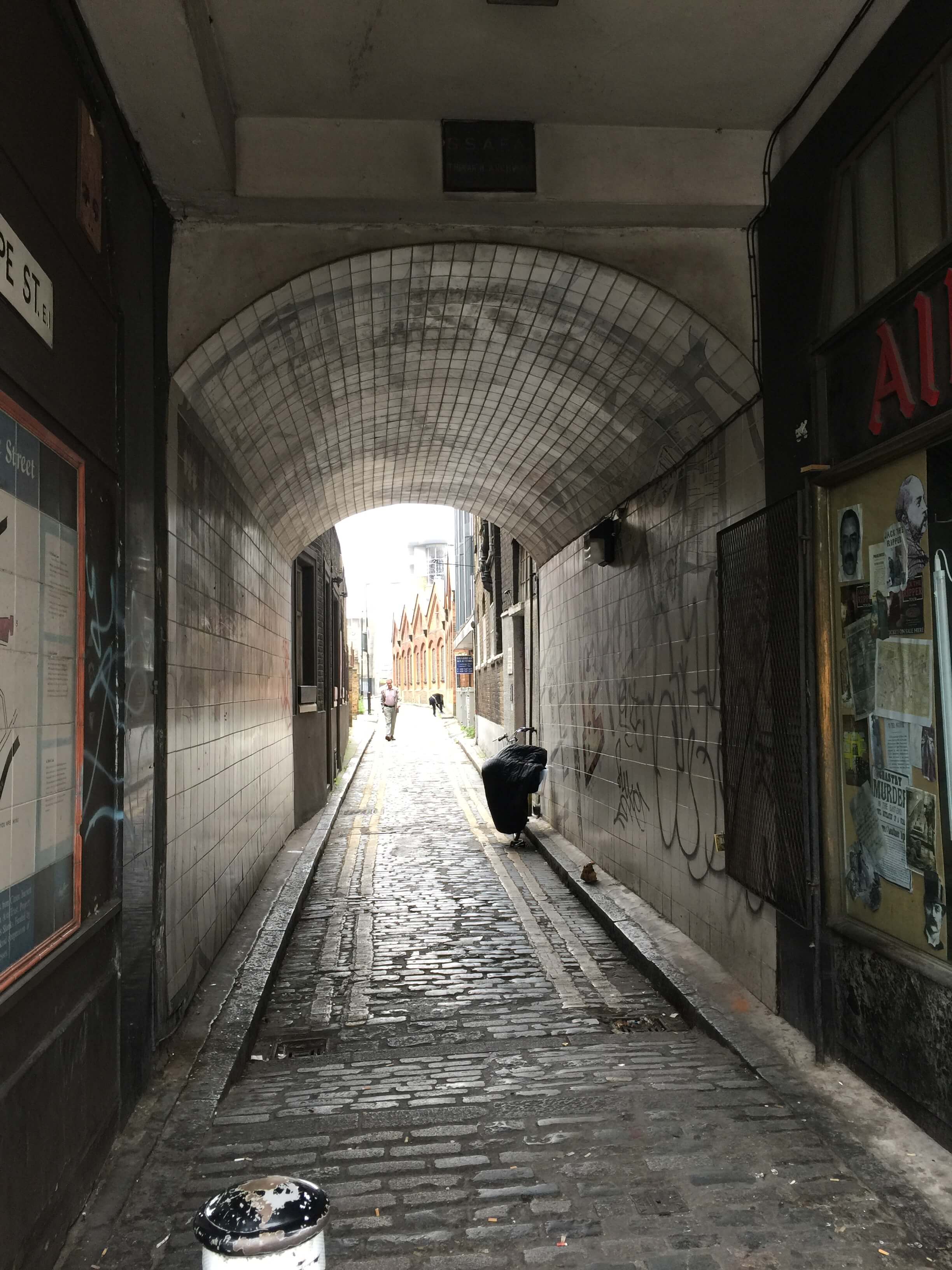 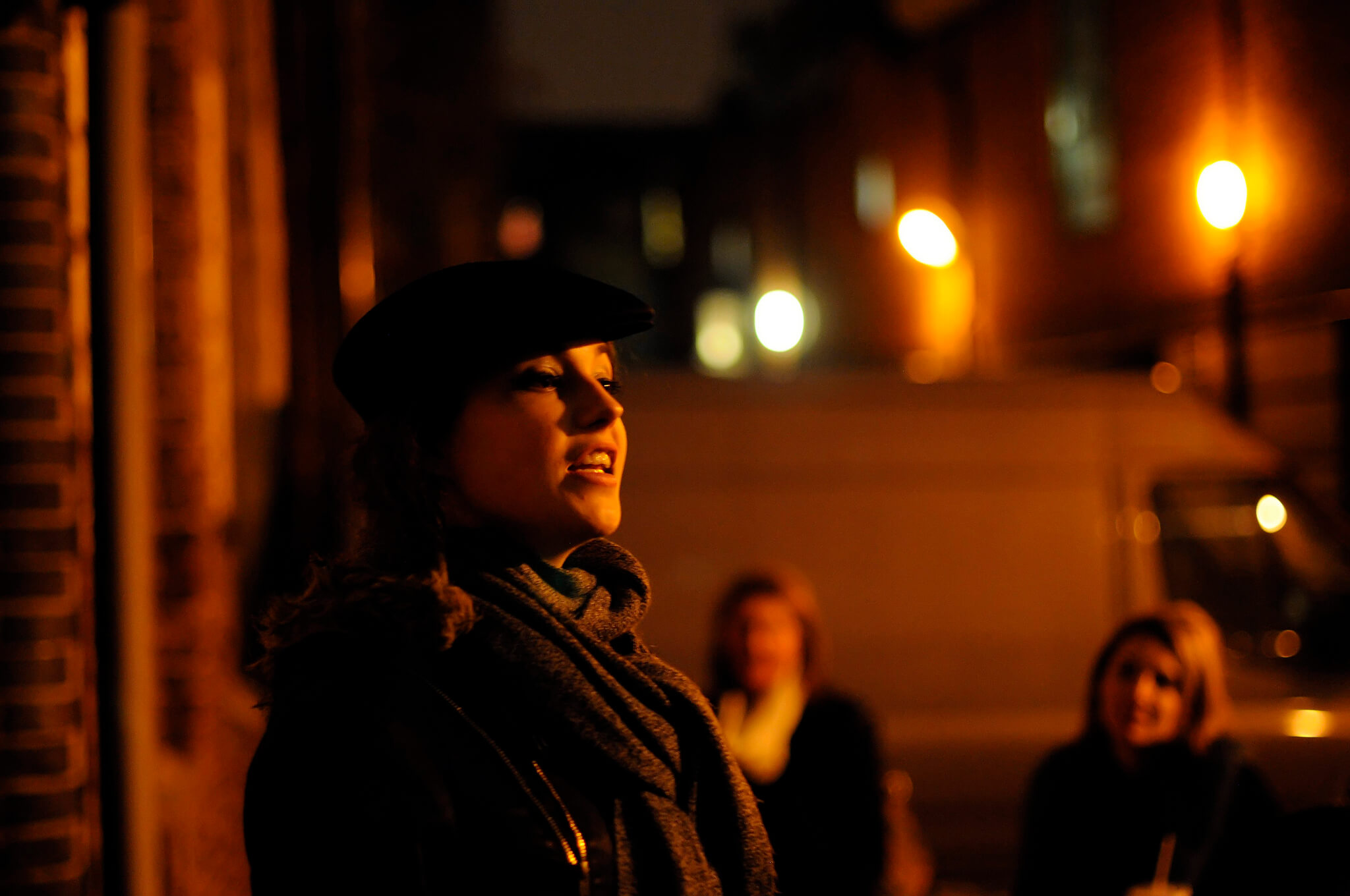 The best way to experience the history and mystery of Jack the Ripper is to walk along the very streets where he himself walked. The expert tour guides that wind you through the storied past of Jack the Ripper are highly knowledgeable and informative, as you visit the many grisly murder scenes along the streets in the Ripper’s stomping grounds.

Step back in time to 1888, when gas lights flickered in dark alleyways, the foggy nighttime becoming a perfect cover for the villain himself. After walking through the very streets and alleyways where the Ripper committed his murders, you might even have a chance to peruse the historical documents and photographs that the Victorian police once pored over to try and discover the true identity of the Ripper. 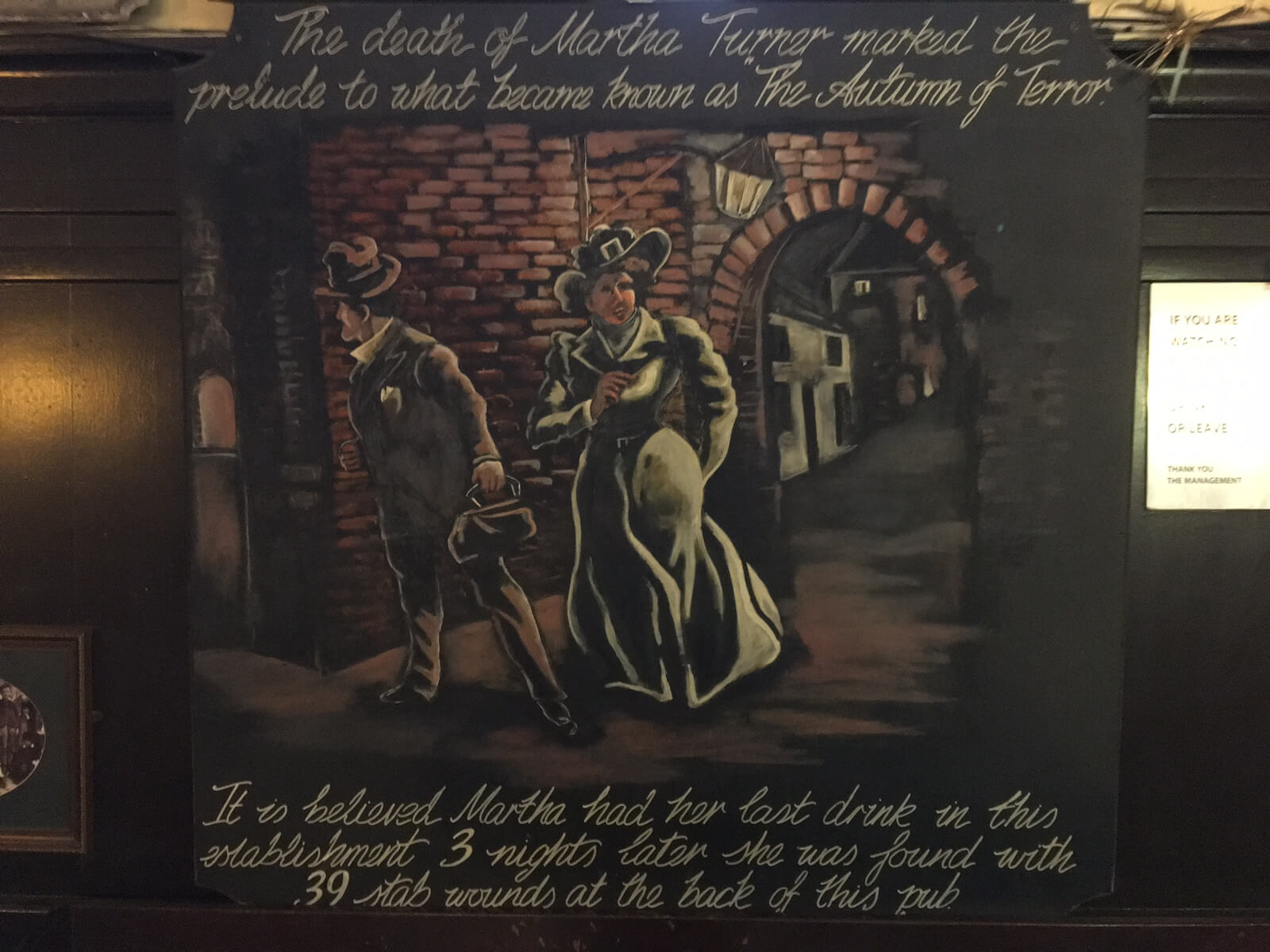 Pubs like the White Hart are adorned by reminders of Whitechapel’s dark past.

Whether an amateur sleuth or a Ripper fanatic, these walking tours are a great way to make the most of a foggy London night! There are many different companies that offer tours along his path, find one that speaks to you and walk where Jack walked… and stalked.

New Jack the Ripper Evidence – Has He Finally Been Discovered? 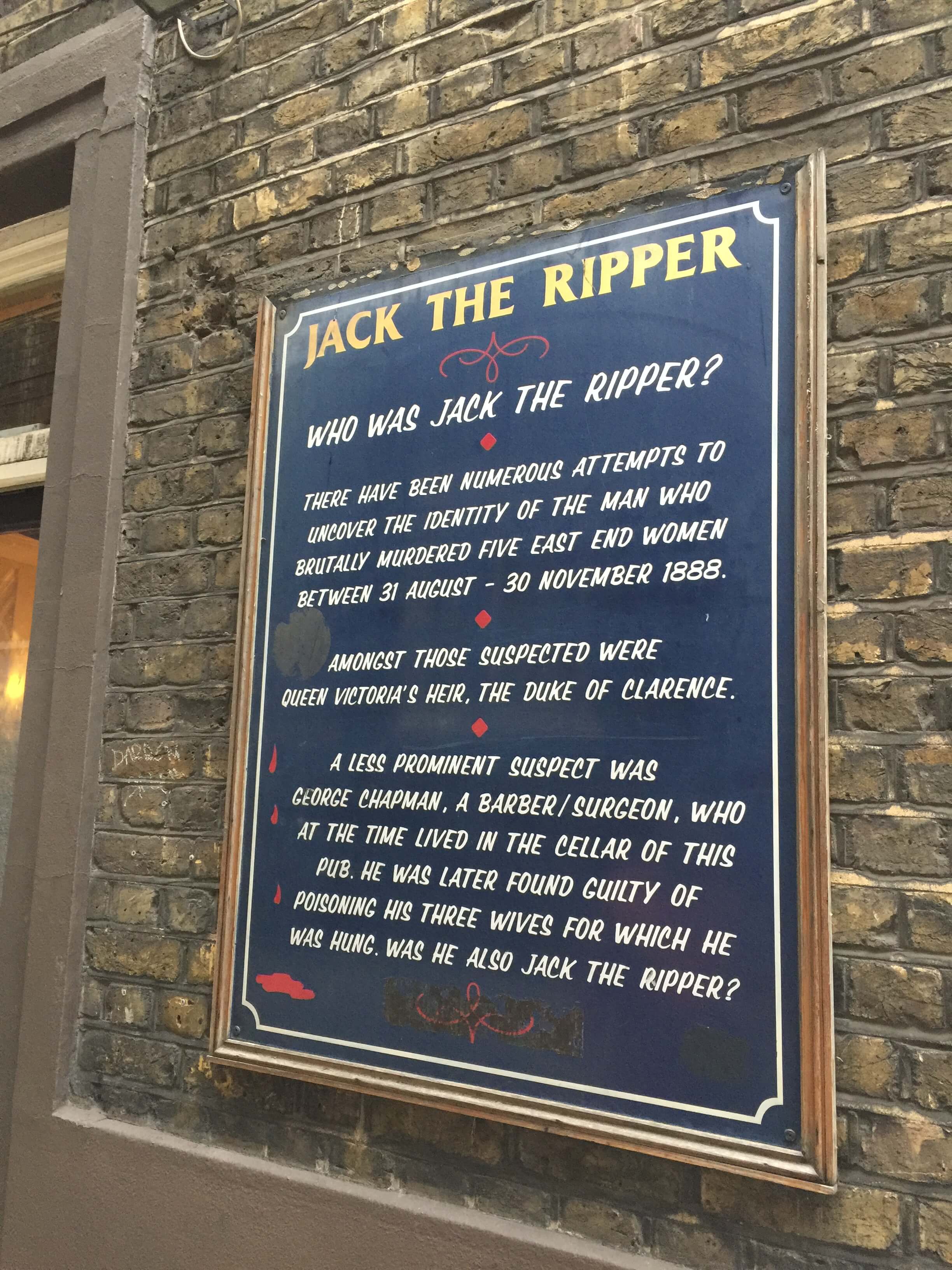 Who really WAS Jack the Ripper?

For almost 130 years, this character has eluded even the most ardent researcher, however, in a recent article published by The Telegraph, it’s claimed that a 9,000 word diary originally found in 1992 may actually point to the true identity of Jack the Ripper himself.

Though speculation has surrounded the document since its discovery, new evidence seems to point to its authenticity. It appears that a house in Liverpool, once belonging to a wealthy merchant named James Maybrick during the same years of Jack the Ripper’s nighttime terrors, was undergoing construction when one or more of the workers supposedly stumbled upon a hardback diary under the floorboards. Though there are questions as to whom actually found it and how it got into the most recent owner’s hands, there are entries exposing details that only the killer – or an extremely well-read expert on the subject – would be able to pen. 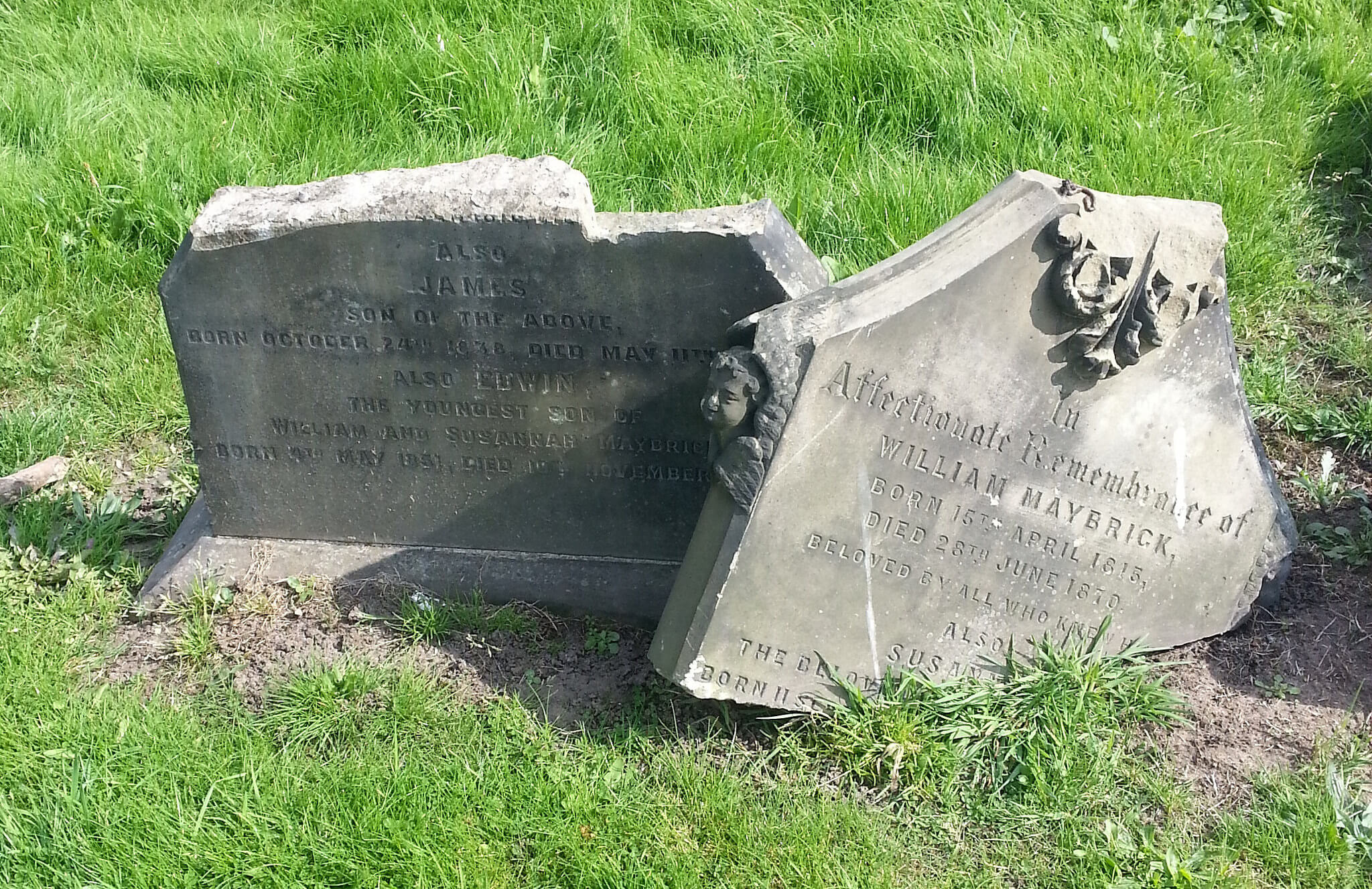 The grave of James Maybrick, the man alleged by some as being Jack the Ripper.

More research is being done, though if any indication is given by the writing, perhaps the last line is the most damning. In an ominous final note to the diary in 1889, the author writes:

“I give my name that all know of me, so history do tell, what love can do to a gentleman born.
Yours Truly, Jack The Ripper.”

Will the mystery ever really be unraveled, however? Was it, in fact, James Maybrick? While the century-old search continues, take a walk along the misty cobblestones, read the history, visit his haunts, and appreciate the calm along those alleyways where once his footsteps could be heard.