There’s lots of things to do in Switzerland. You can go skiing in the Alps, kayaking in the lakes, take in the epic mountain scenery and oh, so much more. But for a true foodie, there’s really only one proper way to experience a new country – by tasting the best traditional dishes. In Switzerland, that has to include the delicious Swiss desserts available throughout the country!

Lucky for you (unlucky if you’re on a diet), Switzerland is well known for all things sweet and chocolaty. So, without further ado, here is a list of the 5 Swiss desserts you must try while you are travelling in Switzerland! 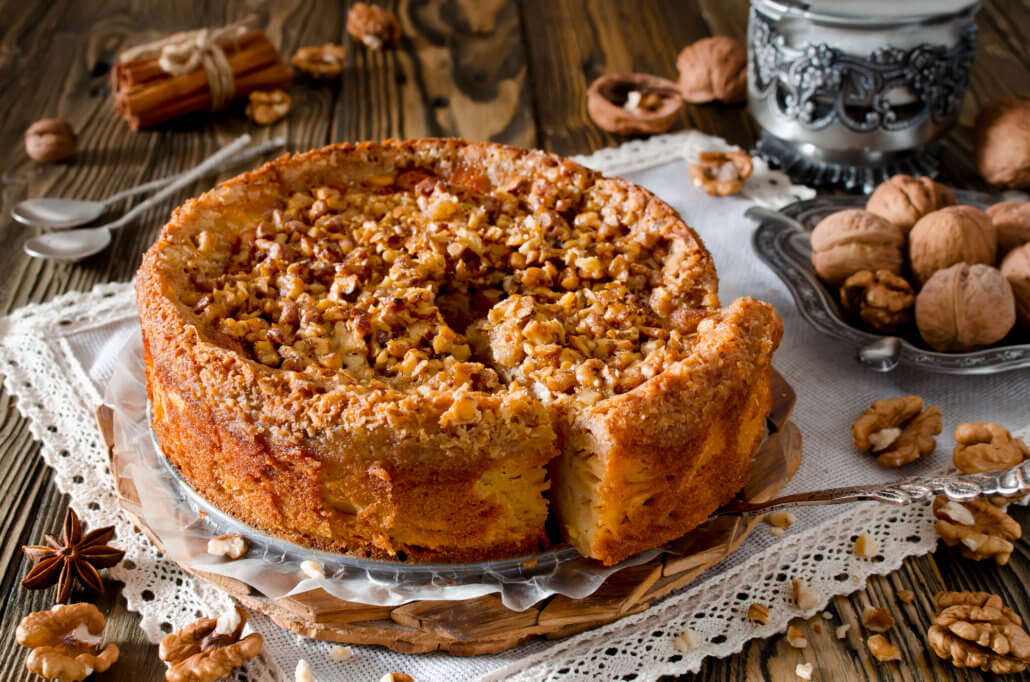 The Nusstorte (also called Bündner Nusstorte) is often associated with the canton of Graubünden, which covers a huge part of eastern Switzerland. You might even know itäs most famous town – Davos?

Although the climate of the region doesn’t actually support the growth of nut trees, the recipe for the modern version of the Nusstorte was created in Engadine, the Southern part of Graubunden.

There are actually several different theories on how this dish was created, but the most interesting one is that a French chef moved to the area, and was able to bring walnut trees with him and plant them in his garden. How he managed to travel to Switzerland with trees in his suitcase is a mystery in itself!

The “modern version” actually dates to the 1920s. The original, 19th century Nusstorte recipe had nuts mixed into the dough, but there was no filling in the pastry. The modern recipe, on the other hand, has cream and nut filling which is very rich in flavor.

This dessert is usually made by independent local bakers in Engadine, and is one of the most well-known Swiss desserts. And, because there is a lot of different bakeries that sell the Nusstorte, you will find lots of different versions of all over the region. Some confectioners add honey to the filling, while others substitute heavy cream for milk – not drastic differences.

Bakers export this to other regions in Switzerland, so, you should be able to find the Nusstorte anywhere in the country. Even if Graubunden is not on your itinerary. 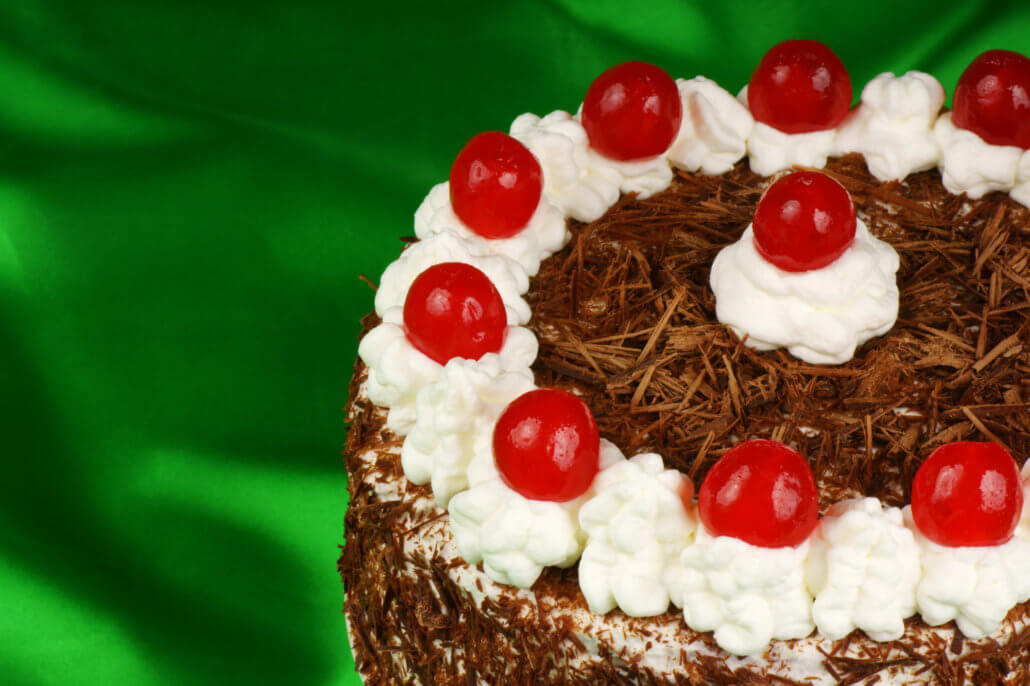 Way back in the early 1900s, pastry chef Heinrich Höhn invented a delicious dessert in the city of Zug. It was the Zuger Kirschtorte – a cake made from nut-meringue (almonds and hazelnuts), sponge cake, buttercream and fruit brandy.

Even though this Swiss sweet is called cherry cake (that is the direct translation), it doesn’t actually contain raw cherries. The flavor is obtained by adding kirschwasser – fruit brandy made primarily from morello cherries. So naturally, you can taste the alcohol in the cake, as well as a little bit of cherry, if you have a good palate. It’s not too strong, but you should wait a little before you get behind the wheel after eating this cake. Breathalyzers don’t really know the difference between cake and pure brandy, so be careful if you overindulge.

If you want to try the original recipe, go to the Treichler pastry shop in Zug. Heinrich Höhn actually worked with Jacques Treichler in the 1900s, and eventually he sold him his little bakery. Today, this pastry shop is world-famous, mostly because they still make the Kirschtorte according to Höhn’s original recipe, which took him years to perfect.

You can find variations of the Kirschtorte throughout the country. In Zurich, the best alternative is the Honold-Kirschtorte – not quite the authentic recipe, but pretty close. But if you really want to try the real deal, make sure to include Zug in your Switzerland travel itinerary. 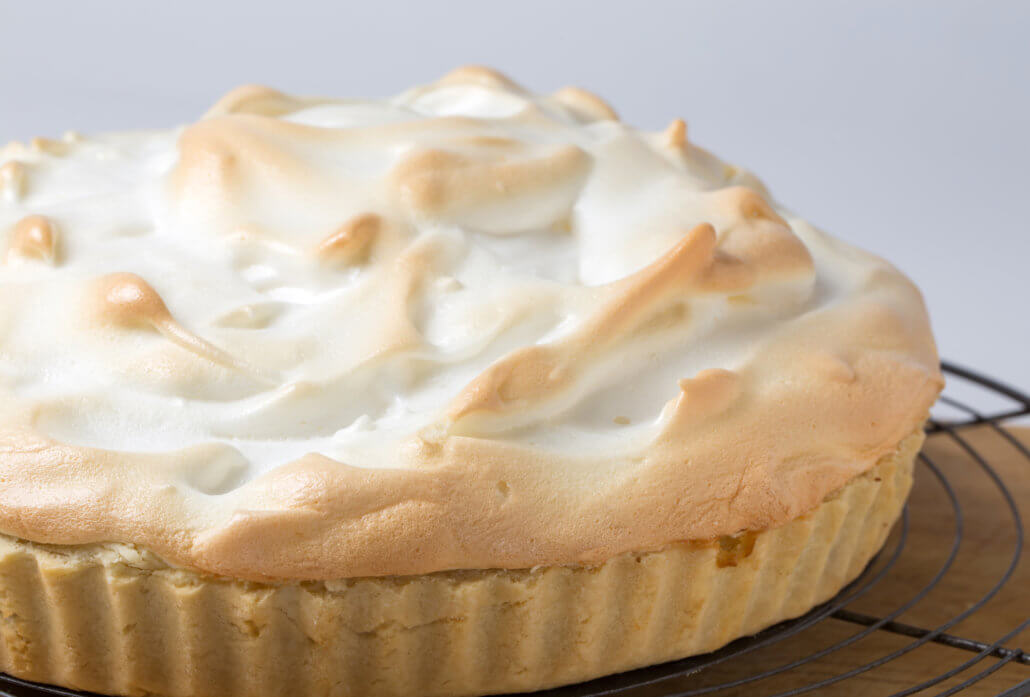 Homemade lemon meringue pie, a classic of European dessert cuisine, on a cooling rack fresh from the oven.

There’s Italian meringue, French meringue, and then there’s Swiss meringue. So what exactly is the difference, and why should you try the Swiss one, if you’ve already tasted the others?

One difference is preparation – Swiss meringue is prepared by beating the egg whites and sugar over a pan of boiling water until the sugar melts completely, which is not the case with the French and Italian types. Because of this, Swiss meringue differs in texture from the others too – it is smoother and silkier than any other meringue.

Swiss meringue appropriately originates from Meiringen – a small town near the Interlaken area, somewhere you may be visiting. This town swears that they were the first to ever create meringue, although the French claim that they wrote about it first. But, even though there isn’t tangible evidence of Meiringen being the source of all things meringue, that still doesn’t stop them from bragging about this and the local waterfalls where Sherlock Holmes died!.

So, that’s where you should head, if you want to try out the most authentic version of this dessert. More specifically, go to the Tea Room Fructal in the center of the town, close to the Sherlock Holmes Museum. This cozy cafe actually achieved a world record in 1985  by creating the largest meringue in the world, which weighed 62 kilos and measuring 2.4 meters long!

There you can try pretty much any type of meringue you would like – vanilla meringue, chocolate meringue, Bailey’s coffee meringue and lots of other versions. You can also get a not-so-little Sherlock Holmes meringue, and they even have options that are suitable for diabetics! 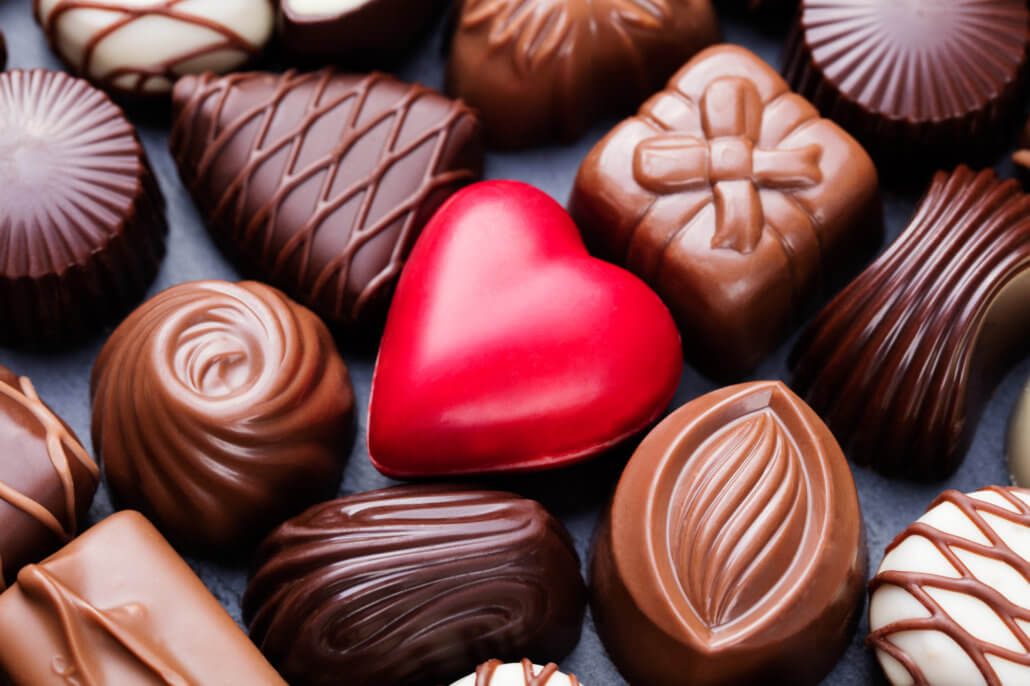 Chocolate bars. Truffles. Pralines. Chocolate fondue. Literal fountains of chocolate. None of those are new to you – you’ve probably tried everything on that list at least once by now. But have you ever tried it in a country world famous for Swiss chocolate?

Chocolate is one of the four things that Switzerland is widely famous for (watches, cheese and the Alps being the other three). Brands like Lindt, Godiva, Läderach, Toblerone and Nestle are internationally popular. So why not head to the source of it all?

One of the best ways to properly experience the chocolatier life in Switzerland is to attempt to be one for a day. Throughout the country you can find numerous chocolate tours. Some of them include taking on you on a tour of a chocolate factory, while others require you to get your hands dirty and make chocolates of your own. And whatever you make, you get to keep and take home – perfect little gifts for the loved ones at home!

But there’s something all of them have in common – you get to taste delicious chocolates prepared by some of the best chocolatiers in the world. And also try your hand at making these tasty desserts.

If you don’t actually like participating in these activities, don’t worry – there are also lots of tours that don’t require you to do anything, apart from just tasting the chocolates. You just need to bring your appetite – after two or three shops, you might start to feel full. So, it’s best to go on an empty stomach before you take on this dessert in Switzerland. 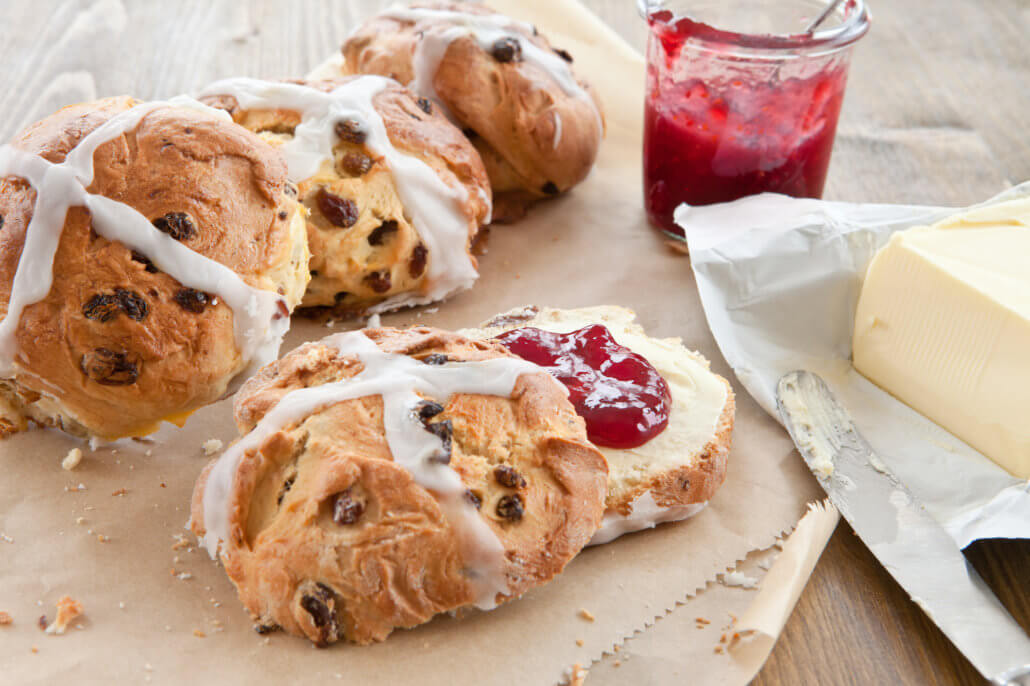 If you have a taste for sweets with dried fruits, you will love this dessert. Birnbrot is just one of the names for this yummy dessert, which directly translates to – pear bread. That’s because dried pears are the signature ingredient of this dish, but often times it also includes other dried fruit like figs or apples. Walnuts and raisins are usually a crucial ingredient in this pastry as well.

The preparation and the exact name of this Swiss dessert depends on the region you’re in.  In Graubünden it is called Bündener Birnbrot, and the preparation there includes soaking the dried pears overnight in rose water or liquor.

Birnbrot is the version that is popular in the Ostschweiz, near the Alps. What’s characteristic about this variant of dessert is that the filling is prepared first, and it is mixed with part of the dough. The filling is then shaped in the form of a log, while the rest of the dough is spread is thinly as possible. The thin dough is rolled around the filing, and it gives it a thin, crispy crust.

And then there’s also Birnweggen, which is most popular in Zentralschweiz.

The main difference in preparation is that, with this version, dough is not mixed in with the filling. Instead, the dough is rolled out thinly, and the filling is spread over it. The dough is then rolled jelly-roll (or rolade) style, and the finished product is softer and moister than Birnbrot.

Both versions are delicious, so it comes down to which texture you prefer. If it’s crispy and chewy, try to find some Birnbrot. But if you prefer moist sweets that melt in your mouth, Birnweggen is what you should try.

Which Dessert Should You Try?

In the end, when it comes to sweets, it really depends on what is available and what you prefer. I can’t tell you which is the best, but whole-heartedly suggest you give them all a try.